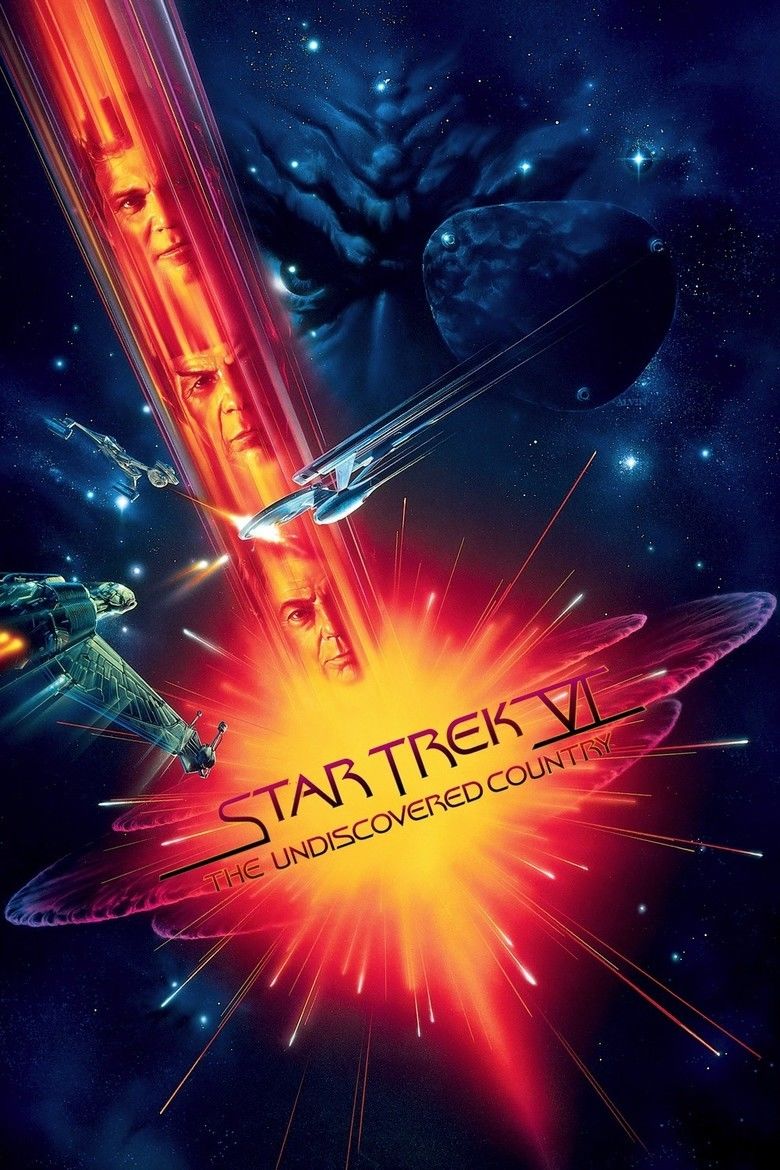 Ranking the Star Trek movies is always a fraught question. Wars have started that way. You can hop onto message boards dating two decades back, and see countless battles between angry fans at the dawn of the internet—like the clash of titans when the world was young1. Their disputes still echo: is Wrath of Khan really better than First Contact? Is Insurrection bad or just mediocre? Does Galaxy Quest belong on the list, even though it isn’t technically a Star Trek movie? Looking back from a later age, we can only marvel at the merciless rhetorical salvoes, and the digital battlefields watered with ink and blood.

What do I think? Well, I think the task of ranking is easier than you’d imagine, because the Star Trek film series contains only a few gems amid a sea of mediocrity. The only ones I ever really liked were Wrath of Khan, First Contact, The Undiscovered Country, Star Trek Beyond2, and Star Trek (2009)—in that order. The first two are on the top of just about every ranking; the fourth and fifth are much more controversial, I’m sure. But what about that one in the middle? Glad you asked. You see, Star Trek VI: The Undiscovered Country has a quiet reputation, not generally remembered or talked about—yet I think it deserves a place alongside the very best movies Star Trek has produced. Today we will explore a triumph of filmmaking, and a bold, innovative installment in the franchise.

Star Trek was not in good shape at the start of the 1990s. TNG had by then hit its stride with a stellar third season, but the TOS movies had suffered the critical and commercial disaster of 1989’s The Final Frontier, and the series’ future was in question. Yet the executives at Paramount felt that they had to end on a high note in time for Star Trek‘s twenty-fifth anniversary. So they brought in the man who had saved the franchise once before: Nicholas Meyer. After the bloated, self-indulgent failure that was The Motion Picture2, he had produced the vastly superior Wrath of Khan on a small fraction of the budget—and now he would have to do the same thing again. How could he give the original crew the send-off they deserved?

The key turned out to be hidden in current events. In early 1990, shortly before Meyer came onboard, Leonard Nimoy suggested to a Paramount producer that the final film be an allegory for the end of the Cold War—Gorbachev in space. The Original Series had featured the Klingons as the Federation’s foremost adversaries, mirroring the geopolitics of the 1960s. Why not make the last TOS movie about the beginning of a new era? It would be a thematic bridge to TNG, where Worf served aboard the new Enterprise, and the Klingons were a staunch Federation ally; it would also provide meaningful closure for Kirk and his crew.

The very first thing that happens in Star Trek VI is a titanic explosion, sending a purple, two-dimensional shockwave rippling across light-years. The starship Excelsior, under the command of Captain Sulu, gets hit by the blast, and a brief investigation reveals that it originated on the Klingon moon Praxis, formerly their foremost energy production site3. Sulu contacts the Klingons and offers assistance, only to be informed that they have the situation completely under control.

It turns out that the Klingons don’t really have it under control—their capital Qo’noS will be uninhabitable within fifty years, and they cannot bear the disaster’s economic costs while also maintaining a vast military. Their Chancellor, Gorkon4, has thus made the unprecedented decision to open peace talks with the Federation. The mission of Captain Kirk and the Enterprise is to escort the Chancellor’s ship to Earth for negotiations. A long era of military conflict may be ending… and Kirk, bitter towards the Klingons for killing his son, is not entirely happy about it, nor are certain Starfleet officers, who would prefer to strike while the enemy is weak.

The Enterprise meets the Klingon flagship near the Neutral Zone. When Gorkon, General Chang, and other officials beam aboard for dinner, the situation is tense, with the two crews shooting subtle (and less subtle) barbs at each other, but there are a few promising moments hinting that relations may yet improve, that peace may yet be possible. The Klingons and the Starfleet officers drink Romulan Ale together, and part ways for the evening.

Then the Enterprise inexplicably opens fire. Caught unprepared, the Klingon vessel suffers heavy damage, and unidentified Starfleet crew are able to board it, mortally wounding Gorkon. Captain Kirk never ordered any of this; shocked and blindsided, he beams over with McCoy, and they attempt to save the Chancellor. They fail. A dying Gorkon tells Kirk, “Don’t let it end like this”—and then he and McCoy are placed under arrest for war crimes.

The race is on. The Klingons are still willing to discuss terms, but it is a fragile arrangement. Aboard the Enterprise, Spock must figure out who was behind the plot, which must surely have involved Starfleet personnel. Meanwhile, Kirk and McCoy attempt to escape the Klingon prison moon5 of Rura Penthe. If they do not act in time, the same conspirators who killed Gorkon will sabotage the upcoming round of negotiations—and destroy any hope of peace.

Star Trek VI is a mystery, a political thriller, and an adventure story, all in one. It is very well paced. Some films take ages to set up, but the beginning of this one is fast and efficient, delivering artful character development while keeping the plot moving at a steady clip. Twenty minutes in, Kirk is already face-to-face with the Klingons. Ten minutes after that, the Enterprise has opened fire and kicked things into high gear. Only the Rura Penthe prison break scenes seem to drag a little, but the script never really loses momentum, and the final act is an absolute delight to watch.

The cast and characters are phenomenal, too. They have to be—given the tight budget, Nicholas Meyer couldn’t just wow the audience with empty spectacle6, so the movie had to succeed or fail on the strength of its writing. All the Original Series stars shine in their last outing as a crew. Kirk, true to form, gets into fistfights and makes out with an alien woman. Spock has a chance to become quite emotional, at least by his standards—there’s some great acting by Leonard Nimoy. Dr. McCoy is as sardonic as ever; this would be DeForest Kelley’s last appearance as the character. And Sulu, promoted between movies, makes a great captain. We see some excellent moments with Scotty, Chekov, and Uhura, too, though unfortunately they don’t get quite as much screentime.

The two main guest stars are Valeris and Chang. Valeris, played by Kim Cattrall, is a Vulcan officer in Starfleet, as well as Spock’s trusted protégé. He intends her to become his replacement, though she maintains she could only ever be a successor to such an illustrious figure as Spock. Cattrall plays the role with a sort of quiet, dignified assertiveness, befitting an up-and-coming Vulcan. General Chang, meanwhile, played by Christopher Plummer, is anything but quiet—he is a soldier of the Klingon Empire and a warrior to the core, rivaling even Shatner in terms of magnificent overacting. Like any cultured villain, he quotes Shakespeare7 at every possible opportunity.

In technical terms, The Undiscovered Country is brilliant. The soundtrack, composed by Cliff Eidelman, is in my opinion one of the best film scores period, conveying a perfect sense of foreboding and tension. The visuals, too, are excellent. You can see that the production team gained a lot of experience since The Wrath of Khan. Budget issues meant that a lot of sets were reused or cobbled together, but you wouldn’t know it just by looking—maybe the dim lighting helped with that one. Shipboard corridors appear cramped and utilitarian, far from the luxury-hotel look of the Enterprise-D. The red, naval-style uniforms, introduced back in Star Trek II, remain some of the snappiest costumes in the entire franchise. And of course, the space battles are well choreographed and spice things up quite well. My only gripe is that the photon torpedoes, supposedly in the multi-megaton range, cause relatively minor damage even on direct hits. The Enterprise alone soaks up several!

There were a few things I disliked—no movie is perfect. In one scene, the Enterprise makes it across the border by bluffing a listening post, and Uhura does a terrible job trying to speak Klingon. By all rights her character should be fluent in the language of the Federation’s main adversary; Nichelle Nichols in fact raised this point during filming, only to be overruled. I also found Chang’s constant, gratuitous use of Shakespeare to be grating at times. We get it, man—you read Hamlet! I read it, too, and you don’t see me communicating entirely through out-of-place quotes. But that’s enough of my griping. The writing here is really very good, some of the best the franchise has ever offered.

On my latest rewatch of Star Trek VI, I was reminded of The Hunt For Red October, another of my favorite movies. It wasn’t just that the same actor who portrayed the Excelsior‘s helmsman also played one of Ramius’ co-conspirators; they’re both movies about the Cold War, made at the end of the Cold War, featuring intrigues, military plots, and awesome ship-to-ship combat8. But thematically, they diverge in an interesting way. The Hunt For Red October celebrates the military with a gung-ho sort of patriotism, and instead of dealing with the political upheavals of 1990, it looks back to 1984, a simpler time when the battle lines were clearly drawn. The Undiscovered Country, by contrast, looks to the future. Kirk and Gorkon both fear they will be obsolete in the new world, even as they try to build it; and in the end, the villains9 are not specifically humans or Klingons, but people who seek to derail an uncertain peace in favor of continuing a war they understand.

Few Star Trek movies have achieved true greatness. It is a famously hit-and-miss franchise, even worse than Star Wars in that regard. Yet I think that in ranking and evaluating the films, putting Wrath of Khan and First Contact always at the top, the fractious fanbase has overlooked the sixth installment—a brilliantly written gem, even if it’s not as bombastic as some of the others. The Undiscovered Country is a reminder of what sci-fi cinema can be when it has a brain. Absolutely recommended!

Thanks for letting me indulge my Trekkie fanboy side, everyone. Until next time—I’ve got a couple different posts in the works, and we’ll see which one I write first.