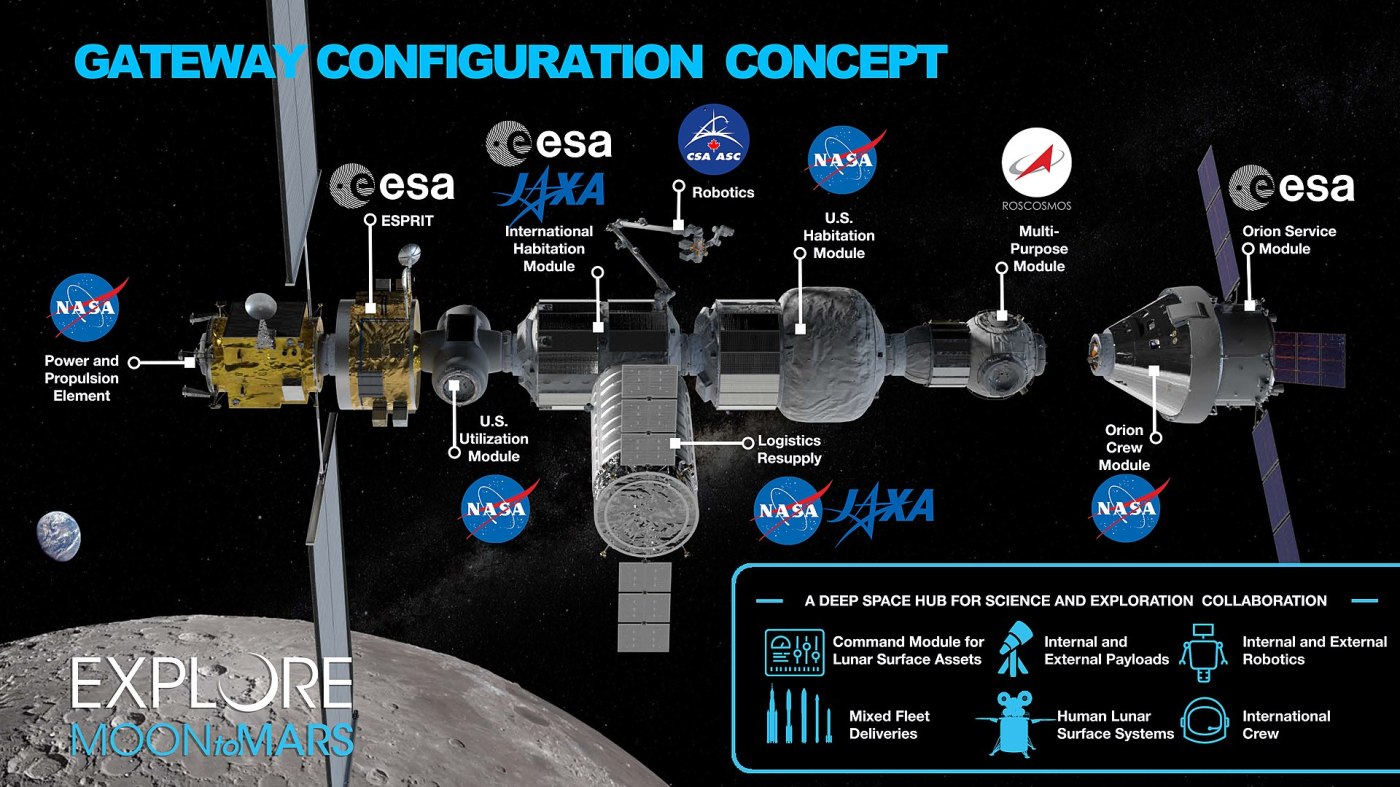 After decades of messing around in low Earth orbit, and several false starts (I shed a tear for Project Constellation), the 2020s may finally be a spaceflight renaissance. NASA’s always-ambitious plans are now backed up by real, concrete progress in the private space sector. SpaceX has a feasible roadmap to go to Mars, though the viability of sustainably colonizing it remains to be seen, and it has already drastically brought down the cost of launches through reusable vehicles like the Falcon 9. Competitors like Blue Origin have also thrown their hats in the ring, promising a commercial space race from which all of humanity stands to benefit. Even NASA’s pork-barrel projects like SLS and Orion seem to be inching towards a tangible product. With everything going on, odds are looking good that sometime within the decade we’ll send people beyond LEO.

Which brings us to NASA’s current initiative for manned deep-space exploration. Donald Trump announced this grand endeavor towards the end of 2017, promising a human return to the lunar surface by 2024. Several components—the Orion spacecraft, an as-yet unbuilt lander, the Space Launch System (SLS), and the Lunar Gateway space station, to name a few—will work together to build a sustainable and multinational lunar presence quite unlike the flags-and-footprints of Apollo; then, in the 2030s, NASA will undertake its long-awaited expedition to Mars.

Such is the plan. There have been many other plans, and most never went anywhere. While Artemis does look promising, it’s looking unlikely that we’ll actually reach the Moon by 2024, especially now that Donald Trump has lost the election. Joe Biden unfortunately does not stand to be quite as aggressive on space policy. We’re looking at delays, major changes, perhaps even yet another “scrap it all and start over” event like Obama did in 2010. Who knows? But before Artemis gets canceled or modified, let me give you an overview of the initiative as it currently stands:

While the Artemis Program is a creation of the Trump presidency, it has antecedents going back decades, starting with George W. Bush’s 2004 Vision for Space Exploration and the ensuing Constellation Program. Constellation called for a manned lunar mission to the Moon by the far-flung year of 2020 (cries in broken childhood dreams). This would be accomplished using two new launch vehicles, the Ares I and the Ares V; a lunar lander named Altair; and an all-new crew capsule, Orion. In addition to its deep-space capabilities, the Orion capsule would replace the ageing Space Shuttle and begin missions to the ISS by 2014 or so.

Constellation unfortunately never got very far. The Ares I flew, once, and the Ares V was never built. Then Obama canceled the Constellation Program in 2010, which was a very bad move and set human space exploration much further back than was necessary. He replaced it with a milquetoast agenda involving a pointless asteroid capture mission and other random crap. At least we got the Commercial Crew Program out of it, which has finally come to fruition with the SpaceX Dragon launches this year and the upcoming Boeing CST-100 launch; he also kept and further developed the Orion capsule, which was successfully tested on an orbital flight in 2014. By 2016 NASA’s human spaceflight program was making agonizingly slow but non-zero progress.

Enter Donald J. Trump. Whether or not you like him—I don’t, for the record—there’s no denying that he has been a fantastic president for manned space exploration. He axed the Asteroid Redirect Mission, which was idiotic make-work for US astronauts, and he was very supportive for SpaceX and other private launch concerns, which have experienced considerable success in recent years. Most significantly, he redirected US goals towards a near-term Moon landing. In 2019 this was moved up to the year 20241 and given a name: Artemis. SLS and Orion now had something real to do.

Artemis involves a new launch vehicle, a space station, a lunar lander, the aforementioned Orion capsule, and a number of other goodies besides. It is estimated to cost some $35 billion between 2020 and 2024. International partners include ESA, Japan, Canada, Italy, Australia, the UK, and the UAE, though others may join (probably not Russia or China, which have their own lunar programs). As it stands, astronauts will land on the Moon seven times by 2030, ushering in a new golden age of manned space travel—assuming SpaceX doesn’t get there first.

To accomplish any of these things, NASA needs a heavy lift vehicle. It already has one, in the form of the Falcon Heavy and, prospectively, Starship and New Glenn, but several senators would not at all be happy if their home states lost out on those sweet NASA contracts. Thus we continue to pour heaps of cash into a system that will cost about $2 billion per launch… but hey, as long as the darn thing really does fly astronauts to the Moon, you won’t see me raising too much of a fuss about the price tag. Better the US taxpayer should pay too much for a rocket than for the Pentagon’s even more wasteful pet projects *cough* F-35 *cough*.

Orion is the component that will actually carry crew to and from Earth. It is key to the whole program, the heir apparent to the venerable Apollo capsule and the chariot in which our astronauts will ride to the heavens. Except in emergency situations it will only see use in deep space; LEO missions are left to private contractors such as SpaceX and Boeing, which was a smart move on NASA’s part.

The Orion capsule, as currently envisaged, masses 8.5 tons and can seat up to six people, though missions will generally fly four. It is affixed to a European-built service module, which will provide propulsion, power, and life support much as the Apollo service module did. Altogether it will be a sleeker, modernized version of the Apollo CSM, which is not at all a bad thing.

The next component is the Gateway Station. This one is somewhat controversial, subject to fierce criticism from the likes of Robert Zubrin, since the justification for a permanent manned outpost around the Moon is… fuzzy, at best. I personally think it would be cool to have, but if Joe Biden cancels it and opts for a more direct approach to the lunar surface I won’t be shedding any tears.

Anyway. Gateway will be a modest space station, comprising two habitat modules, a power/propulsion bus (using an ion engine, notably), a European utility module, and possibly logistics and airlock modules as well. Electricity will be provided by solar panels because NASA is annoyingly nuke-shy these days. Gateway will serve as a refueling hub for reusable lunar landers, and will also be a research outpost in its own right. Astronauts will first stop at Gateway to board the lander before venturing down to the surface.

That leaves us with the lander. For this critical aspect of the mission, formally titled the Human Landing System, there are still three designs under consideration: the Integrated Lander Vehicle, by Blue Origin and a couple other companies; the Dynetics Human Landing System, by Dynetics; and the Starship HLS, by SpaceX. They are pictured below:

Each design is very different from the others, to say the least. The Integrated Lander Vehicle is the most like a classic lunar lander, while the Dynetics HLV takes a more horizontal approach, and the Starship HLS is laughably oversized for the task. Seriously, it’s probably larger than Gateway. On the other hand, it could carry a ridiculous amount of cargo to the Moon, and it’s already being developed for use on Mars (the other two landers would be Moon-only), so it may yet be the superior choice. But I’ll be happy as long as NASA selects and deploys some variety of manned lunar lander.

NASA’s current timeline is very ambitious, with few unmanned test flights to pave the way. Orion has already flown, with Exploration Flight Test-1 way back in 2014, but the monumentally expensive SLS will only go up once before they put humans in it. This haste is probably due to a limited budget combined with Trump’s 2024 deadline; now that that deadline is almost certainly going to be relaxed, we might hopefully see some extra groundwork before the manned flights start. Nevertheless, here is the current NASA plan for Artemis:

Now, the plan I just outlined is very exciting, but 2024 isn’t going to happen. It probably wasn’t realistic even with a second Trump term. 2028, though—that’s a goal to shoot for. My prediction is that Joe Biden will ease up on the timeline but still keep things moving along. He could still cancel it, of course, possibly to redirect NASA funds towards climate change (which should be funded, but not at the expense of manned space travel. Fund all the things!).

Crucially, Artemis is much further along than Constellation was the last time a Democrat entered office and thought about cancelling his Republican predecessor’s space policy. The situation is different in other ways: while in 2010, NASA, Roscosmos, and the Chinese space agency were the only entities capable of sending people to orbit, there are now a plethora of private interests with ambitious space agendas. Even if Artemis does get canceled or crippled, Elon Musk and Jeff Bezos will still probably send people to the Moon on their own. China, too, may undertake a manned mission as soon as 2030.

One way or another, we’re going back to the Moon. This is a good time to be alive!