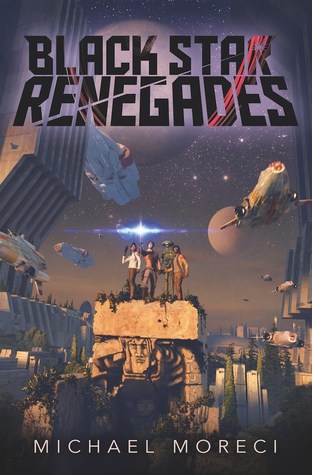 I’ve discovered a surprising craving lately, for straightforward—perhaps derivative—storytelling. Of course I appreciate sleekly inventive settings and genre deconstructions as much as the next nerd, but the problem is that that’s all we’ve been getting lately. Nowadays, to follow in the footsteps of another work is looked down upon as trite, even if the result is entertaining and well-executed. Whole ideas become proprietary and “done before”—take Star Trek, for instance, which seems to have displaced every other work there could possibly be about a single spacecraft on a voyage of discovery.

It was with that trend in mind that I started looking for a book that defied it. I wanted classic sci-fi that didn’t try to subvert every trope in the book with an unorthodox new twist. After some searching I stumbled upon what appeared to be the perfect fit: Michael Moreci’s debut novel, Black Star Renegades.

Black Star Renegades is so thoroughly inspired by Star Wars and Guardians of the Galaxy (mostly the former) that Moreci proclaims as much on its Amazon store page. Ultimately, that works in its favor. What we have here is a fun, fast-paced adventure novel with its own distinctive setting, characters, and feel, that nevertheless has the courage to make straightforward use of tropes. Only some narrative problems and bad habits on the part of the writer hold it back.

The premise is as follows: Cade and Tristan, two brothers from a crime-ridden slum, are trained by a vaguely monastic warrior order called the Well (think Jedi with martial arts substituting for the Force), in the hope that one of them (Tristan) will prove worthy enough to wield an ancient weapon, the Rokura, and restore peace to the galaxy.

At the start of the novel Cade and Tristan travel to recover the Rokura, and things do not go as planned. The result is that Cade ends up on his own, with a mythic weapon he was never meant to carry, and he must figure out how to use it—or whether to use it in the first place. You see, the Rokura is capable of terrible destruction, and has a mind of its own. Making things still more perilous is the fact that the ruler of the warmongering Praxis Kingdom, the cyborg empress Ga Halle (very much like Darth Vader, with interesting exceptions) is keen on seizing the Rokura for her own, galaxy-conquering purposes.

Against Praxis’ overwhelming might, Cade can only succeed with his own skills and the help of a few newfound friends. The heroes are very much a ragtag bunch of misfits, including an outcast pilot, a combat robot, and a genius engineer, and the adventure they go on to save the galaxy takes them from planet to planet, leading to their final confrontation with evil…

So, that’s the story. With a work such as this, the premise is of course nothing new, and the effect must lie more in execution than in concepts. How well does Michael Moreci execute his vision, you might ask? It’s a mixed bag.

Overall, except for a drier stretch in advance of the halfway mark, I enjoyed this book, and there’s certainly enough action to go around. The characters have fun interactions—Cade in particular is a likeable protagonist. The locations are generally well-described, too. I did get the sense that this was a unique universe, not a Star Wars fan fiction, and such planets as the Well’s homeworld, the wretched hive of Kyysring, and the ice world of Dotax are all memorable in their various ways. Praxis is a solid villainous faction, an empire that looks generically brutal on the surface but has a much more complicated backstory. There are also the obligatory wacky aliens, seedy bars on strange planets, and valiant rebel groups, but while Black Star Renegades plays those tropes straight, it doesn’t limit itself to them—I was surprised at several points by the characters’ surprisingly nuanced moral conflicts, and by the few but significant new concepts Moreci introduces.

Those are the highlights of the book. Many other things frustrated me, besides. While the setting was enjoyable to read about, as I mentioned above, I think the characters hop from planet to planet a little too much for any one place to be explored in depth. There are also some grammatical issues throughout. Michael Moreci had an editor when writing this, I later found out, but far too much slipped past the net, including at least two dozen instances of present tense inexcusably sneaking into a past-tense story.

Perhaps the largest flaw in Black Star Renegades is its overabundance of telling as opposed to showing. The author will build up dramatic character moments, which is all well and good, and then ruin them by explaining to the reader exactly why they are dramatic character moments—for example, we’re just told that a certain character is like a father to Cade when they’re barely shown interacting. Any dramatic tension built up by the book’s strengths is undermined by this single, rather irritating habit on the part of the writer.

Even so, that was not enough to make me hate it. I had a great time with Black Star Renegades, in fact, and I would recommend it to anyone who’s looking for a fun popcorn read that fulfills its promises. I intend to read the sequel, We Are Mayhem, when it comes out early next year.

Should you read it? Definitely! Store link is here: https://www.amazon.com/gp/product/B072QWRZ29/ref=x_gr_w_glide?caller=Goodreads&callerLink=https://www.goodreads.com/book/show/34964896-black-star-renegades&tag=x_gr_w_glide-20