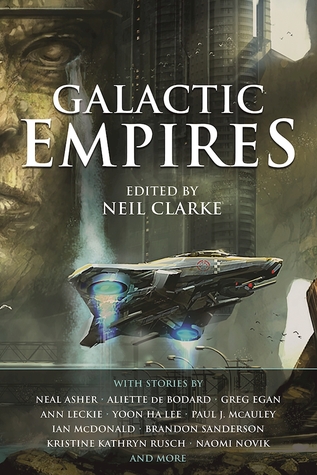 Well, here’s the second part of my review of Neil Clarke’s Galactic Empires. Here I will tackle the book’s latter twelve stories, twelve tales of weirdness and wonder, and try to make sense of how this anthology fits together, if it does at all.

“A Cold Heart” by Tobias S. Buckell: When I started this story the first thing I noticed was that it was written in the second person, and just for that I’ve deducted two points out of ten, because one should never, ever write in the second person. Third-person past tense is hands-down the best style, and I can tolerate anything up to the tiresome first-person present tense. But second-person… just no. It’s gimmicky and unorthodox for the sake of being unorthodox. Buckell’s peculiar narrative choice had me distracted from start to finish, and the story would have lost nothing without it.

Anyway. I liked the setting: humanity has fallen under the heel of alien governors known as the Satraps, and a cybernetically enhanced mercenary gets involved in a resistance movement while also trying to recover the memories one Satrap stole from him. Characterization and prose were solid. I also thought the imperial domination of Earth by a rapacious foreign power was interesting, if grim, and overall this would have been an excellent story without that one frustrating stylistic choice.

“The Colonel Returns to the Stars” by Robert Silverberg: Quality story about a commander who is called back from retirement to perform one last mission for the Empire. Even the title is excellent, succinctly hinting at the plot and piquing the reader’s curiosity.

The location descriptions are excellent—the protagonist’s gilded villa on a gilded planet comes to mind—and early on the author introduces a tragic event in the protagonist’s path that paves the way for a revelation later. Notably, the focus isn’t on space travel, as the Imperium is connected by portals on planetary surfaces. Instead there’s a great deal of emphasis on the characters and the moral conflicts they face. While the piece kept me engaged and was satisfying enough, I didn’t quite like the ending, where—SPOILER START—the protagonist, for reasons selfish but fairly understandable, chooses to betray his duty to an empire that was never established as particularly evil—SPOILER END. Oh, well. No story is without sin.

“The Impossibles” by Kristine Kathryn Rusch: Lawyers IN SPACE. And it’s great. I particularly like Kristine Rusch’s piece for addressing what could very well be a real problem in any alliance between species: the simultaneous existence of wildly different legal systems. The protagonist, a young lawyer named Kerrie, tackles cases in the Earth Alliance InterSpecies Court, where violations of other species’ cultural codes are adjudicated and often heavy-handedly addressed. It is extremely difficult to earn an acquittal. Nevertheless, Kerrie tries to do just that in one particularly thorny case, and what follows is a fascinating legal narrative more than a little reminiscent of Kafka’s The Trial.

I liked the story, and recommend it. But its main problem is the same as so many others in this anthology: a loose federation of states does not a galactic empire make.

“Utriusque Cosmi” by Robert Charles Wilson: Here we see a fine example of the “entities hanging out in space” trobe I discussed earlier. I say it’s a fine example because Wilson’s story is quite splendidly written, building up a bizarre setting with praiseworthy economy of detail, while also juggling timelines like nobody’s business (the phrase “a few billion years ago tomorrow” is used, and it’s wonderful). The “Empire” in question is a galaxy-spanning computer network holding countless immortal beings, called the Fleet, which faces an unknown and enigmatic Enemy that is slowly devouring inhabited planets. As this takes place the protagonist Carlotta adapts to having been uploaded from Earth to the Fleet, and bonds with her robot (?) caretaker Erasmus. Overall this is a poignant work of fiction. My first complaint is that it can be a lot to take in on a first read, and my second is that it stretches the definition of “galactic empire” more than Wilson’s universe-bending cosmology stretches spacetime.

“Section Seven” by John G. Hemry: This is probably the shortest story in the book. As such there’s not a lot to talk about here, and to reveal the central twist would spoil it. I will instead speak in vague terms—it’s centered around espionage on a colony planet, as a Federation-style interstellar polity attempts to impose its will through subtler means than battleships—and then assure you that the twist is actually pretty cool, certainly relatable for anyone who, like me, welcomes globalization and standardization. I highly recommend this one.

“Invisible Empire of Ascending Light” by Ken Scholes: I believe this one is about a succession crisis in a spacefaring theocracy. I read it a while ago, and it didn’t make much of an impression on me, even though spacefaring theocracies are normally my thing (coming up on this blog: a discussion of the batshit craziness that is Warhammer 40,000). But from what I remember it was competently written.

“The Man with the Golden Balloon” by Robert Reed: Loved this one. A husband and wife, passengers on a planet-sized ship travelling through the galaxy (it’s a little vaguely defined), confront a mysterious being residing in an unexplored cave system. Said mysterious being tells them a story about its past. Nevertheless, it’s an interesting past, with some surprising twists and turns. Atlantis is mentioned. Great atmosphere and characterization in this story, even though there’s no action, per se.

“Looking Through Lace” by Ruth Nestvold: This story is about an anthropologist who travels to a primitive planet named Christmas, with her mission being to decipher a language spoken only by women. Most of the themes concern cultural relativism and gender roles, which, to be completely honest, bored me the whole time I was reading. Linguists and gender studies majors might get more out of this story, though. It’s certainly well-written.

“A Letter from the Emperor” by Steve Rasnic Tem: This is one of the handful of pieces in the anthology that delivered the kind of imperial drama I expected to see. Its focus is on the difficulty of running an empire—the protagonist serves on a relay ship, transmitting communications across the barely governable vastness of space—and Steve Rasnic Tem crafts a beautifully lonely, poignant story in doing so.

“The Wayfarer’s Advice” by Melinda Snodgrass: This was a fun space opera story, in which the crew of an outlaw freighter find a frozen imperial princess in the wreckage of a battle. Complicating matters somewhat is the fact that the protagonist, an officer-turned-freighter captain, has a romantic history with that princess. The empire in question is also a spacefaring version of the Spanish Empire, which is very cool. Overall, “The Wayfarer’s Advice” has excellently crafted characters and setting, and I highly recommend that you give it a read.

“Seven Years from Home” by Naomi Novik: Ugh. What is it with stories about biotech and hippy-dippy preachiness? In this story, an operative of an interstellar confederation travels to  a colony planet with the goal of propping up both sides in a conflict that is raging there—strengthening the confederation’s position in the process. However, she comes to sympathise with one side—tree-huggers who live in harmony with nature and eschew industry and genetically modify the life around them—against the other side—hardworking, pragmatic industrialists who believe in technological advancement and economic growth. The result is that she goes native, and we get a screed against the evil industrialists and their evil pursuit of progress.

Ahem. Yes, the story’s well-written from a technical standpoint, but it annoyed me even more than “The Muse of Empires Lost.”

“Verthandi’s Ring” by Ian McDonald: The names in this one were amusing: things like Ever-Fragrant Perfume of Divinity and Rose of Jericho and Chamber of Ever-Renewing Waters. There are also some remarkable locales, such as a massive steppe where ascetics roam and the horizon curves upwards, or a city hanging from the world’s ceiling above a sea of clouds. However the setting is quite complicated, and Ian McDonald crams it all in at the expense of readability. I recommend this story for its ideas, but its execution leaves something to be desired.

Phew! That’s all twenty-two stories of Galactic Empires, reviewed and rated. In the future I do not believe I will go this in-depth with a short story anthology. Overall, there’s not a whole lot more for me to say, as the theme linking together the stories is tenuous at best, but that in itself is the main problem with the collection. It promises galactic empires, and by extension at least some of the tropes that go with that. The promise is not fulfilled—exceptions including “Firstborn,” “The Wayfarer’s Advice,” “A Letter from the Emperor,” and “The Colonel Returns to the Stars.” Instead the reader gets a dizzying variety of short stories that take just the barest rudiments of the empire concept, then run with it. That’s not altogether a bad thing, however, since almost every story stands well enough on its own, and despite my reservations I would recommend this anthology. My overall rating is…

7/10. Worth putting on your shelf, not just for the kickass cover design.

One thought on “Galactic Empires: A Book Review (Part Two)”