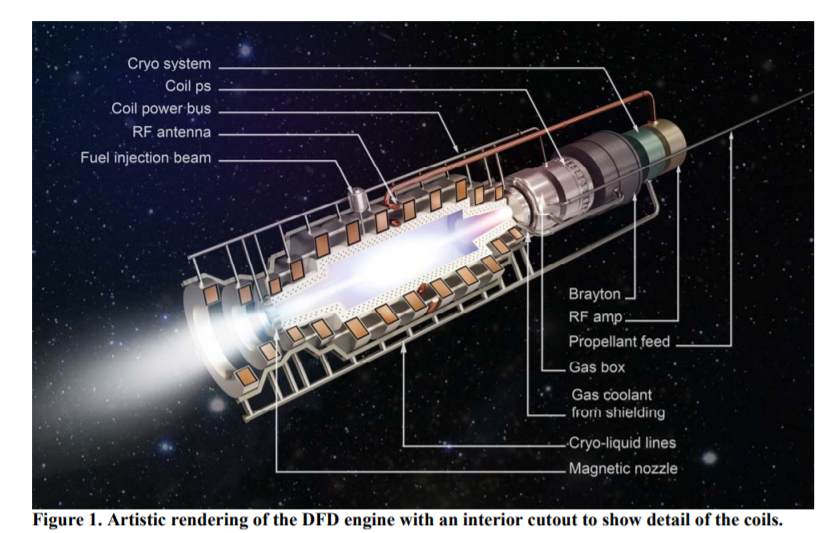 Oddball mission studies are my jam. Sometimes, they are NASA’s jam, too—the agency is not afraid to occasionally explore the more speculative topics, spacecraft which rely on advanced technologies and are many decades away from ever seeing implementation. I stumbled across one such study when I was doing some reading on Pluto the other day. Back in 2017, one Stephanie Thomas, of Princeton Satellite Systems, designed a mission to follow up New Horizons‘ 2015 flyby—and unlike New Horizons, it wouldn’t take nine years just to swing by and snap some pictures. This mission would be a straight-up lander, using a compact fusion drive to get to Pluto in only four years!

Why haul a lander all the way out to some ball of ice, you might ask? Well, Pluto is no ordinary ball of ice. It has complicated terrain, and a tenuous atmosphere, and its own tectonic system, and possible cryovolcanism, and even dunes of frozen methane (!). There are many mysteries to be unraveled, both on Pluto itself and throughout its system of five moons. A follow-up mission would be a scientific bonanza.

Thomas’ paper (accessed here), titled “Fusion-Enabled Pluto Orbiter and Lander,” lays out a plan for a bold successor to New Horizons. Her probe would mass about 7.2 metric tons, making it quite easy to launch aboard a Falcon 9 or even an Atlas; after takeoff, it would begin a long burn taking it almost in a straight line towards Pluto, and after a 3.75-year journey it would arrive with some 1,000 kilograms of usable payload. The lander would venture down to the icy surface, while the orbiter component would stay aloft and make observations.

The centerpiece of the design is its fusion reactor. The numbers given in the report are impressive: 10,000 seconds specific impulse, twice that of a Hall effect thruster, though the two engines (or possibly one big engine) would produce only 7.5 N between them. Thrust power would be around a megawatt for each engine. The concept is based on a reactor currently under development at the Princeton Plasma Physics Laboratory, using a radio-frequency heating method. Note that if we crack fusion for a space mission, such as this one, we’ll solve the problem on Earth as well—hello unlimited free energy!

After the relatively short journey to Pluto, the craft would release a modest 230-kilogram lander. The descent bus is intended to use what’s called “green propellant,” or hydroxylammonium nitrate, which is a less toxic monopropellant than hydrazine1; as for electric power, the orbiter will supply the lander with surplus juice via laser beam. I will admit I was a little confused at first when I saw a solar panel on something going into the tenebrous depths of the outer Solar System. Nevertheless, there is method to their madness—beamed power is a really cool concept that ought to be explored more.

Thomas’ team spoke with Professor Binzel of MIT about selecting possible scientific instruments for the lander. Among the top contenders were a drill and a radio emitter to probe beneath the surface, though the paper mentions that more exotic science may be made possible by the glut of electricity supplied by the orbiter. Said orbiter would include a combination of the sensors used on the New Horizons and Rosetta probes (cameras, obviously, plus spectrometers and radiometers and such), but it would also carry a magnetometer and a thermal radiometer.

Despite its fairly limited mass budget, the Pluto Orbiter and Lander would represent an immense scientific arsenal. What mysteries would it unravel? What further enigmas would it bring to our attention? There’s no way of knowing until we invest the money, crack the fusion problem, and launch a probe out to those remote reaches, following where New Horizons left off—even with so much else going on, I think it would be a damn shame if NASA didn’t seriously think about giving Pluto exploration another go.

One thought on “By Fusion Drive to Pluto”